My trip to BEA had an unexpected bonus - it was also Fleet Week in New York City.

Being a child of the '80s I was a devotee of Top Gun and Air Wolf; therefore, I go giddy bonkers at the sight of fighter jets and helicopters. So when Editor Jill offered to take me to see the Intrepid, an aircraft carrier permanently docked in New York, I managed to get in a 'yes' amid giggles. We arrived at the Intrepid only to find it closed for a special event.

However, because it was Fleet Week, the active aircraft carrier - Iwo Jima - was in port and open to the public. 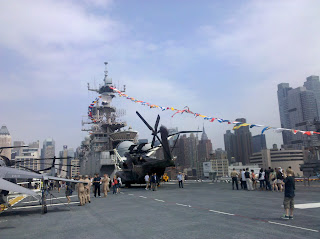 Instead of checking out a tourist attraction we were able to see the real deal and chat with very nice Marines and Navy men. 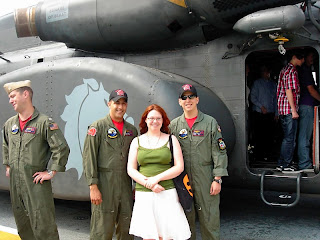 Though it seems obvious I was still amazed at how giant the ship was. And yes, I did want to hum "Danger Zone" the entire time. 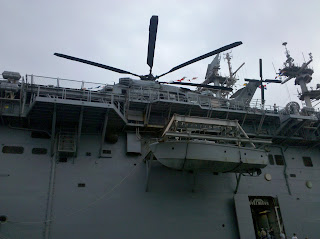 My favorite were the helicopters. 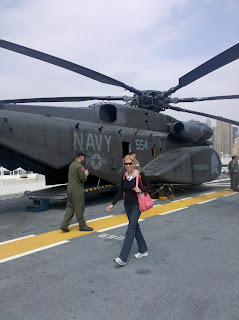 But a part of me was always waiting for them to transform...you can take the girl out of the '80s but -

My grandfather was in the Navy during World War II. The ship he was on was torpedoed in the North Sea and he was in a life raft for three days. He shared his memories of war time with our family later in his life - some stories were filled with hilarity, others with pain.

My grandfather passed away last summer. Somehow visiting the aircraft carrier and hearing about soldiers' lives at sea made him feel close again. And this post seemed a good fit for Memorial Day.
Posted by Andrea Cremer at 11:46 PM