It's the middle of the month, the mid-break of the Breathless Tour, and mid-winter all of which adds up to a general mood of blahs...

Winter up North gets a bit rough this time of year. February is a wicked little month that teases you with its title of shortest month of the year yet somehow seeming the longest of all. In Minnesota the amnesia-inducing glory of spring, summer, and fall lulls one away from the rough patch that is every February. Then this point in the year rolls around and I remember that yes, indeed, winter gets too long, too cold, and too dark.

Can I get a remedy??

Mine is POSTERS! I have 10 signed posters from the Breathless Reads tour. Today I'll announce five winners from the contest.

The FIRST FIVE WINNERS ARE:

Winners: Send your address to me at andreacremerwrites (at) gmail (dot) com and your posted will be mailed to you!!

I'll announce the second set of five winners after next week's tour stop in Raleigh, NC.

You can still enter the contest, so just leave a comment below and I'll include your info in the next drawing.

These winter blues will be beaten yet!
Posted by Andrea Cremer at 1:21 PM 19 comments:

What a week! The Breathless Tour has been amazing thus far - thank you so much to everyone who has come out to see us. You guys are the best! 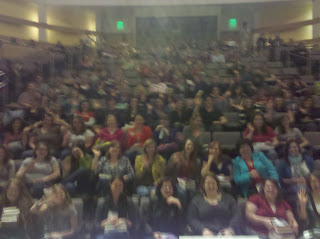 The only problem with the tour is that I've been so busy talking and signing that I haven't been able to take many pictures! Fortunately some awesome fans have been kind enough to share theirs with me.

Here are a few highlights:

In Denver I found a pegasus In Salt Lake City I had a fish friend in my hotel room. 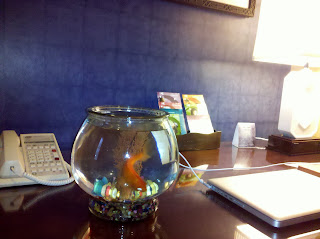 One of my absolute favorite moments was when the lovely Jennifer had me sign a book for her four-year-old daughter Morgan to be given to her on her sixteenth birthday. I was so touched I teared up! 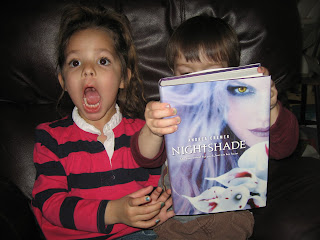 Here is my youngest fan-to-be 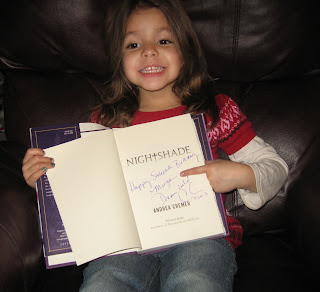 We're taking a little break, but on February 25 we'll be at Quail Ridge Books in Raleigh, NC!
Posted by Andrea Cremer at 8:50 PM 9 comments:

To Heart, or Not to Heart

I've been having fun reading pro and anti-Valentine's tweets and blogs this morning. I understand both sides. I'm not a fan of any holiday that makes some people feel bad and Valentine's Day is probably at the top of the list.

On the other hand, I'm of the quixotic variety so I like flowers and chocolate and silly, sloppy romantic sentiments (cheesy to me = funny and I think laughter and love go hand in hand).

Recounting the problems of this holiday is the amazing Heather Brewer. She makes exceptional points all around.

Here's a video on this dichotomous holiday, which I think nicely shows us a balance Valentine Horror and Happiness:

Also, my fabulous friend and author, David Levithan is going to be talking about his book: Lover's Dictionary (which limns the peaks and valleys of that thing called love) on All Things Considered this afternoon - check it out :)
Posted by Andrea Cremer at 11:46 AM 4 comments:

Writing is a solitary endeavor and can leave you feeling a bit isolated at times. I think the publicity and marketing wonder teams at Penguin have just given we Breathless Reads authors a mental health boost in addition to a great way to meet readers. By the way: here's the poster we're all signing and I'm giving away (10!!) in the contest from the last post. 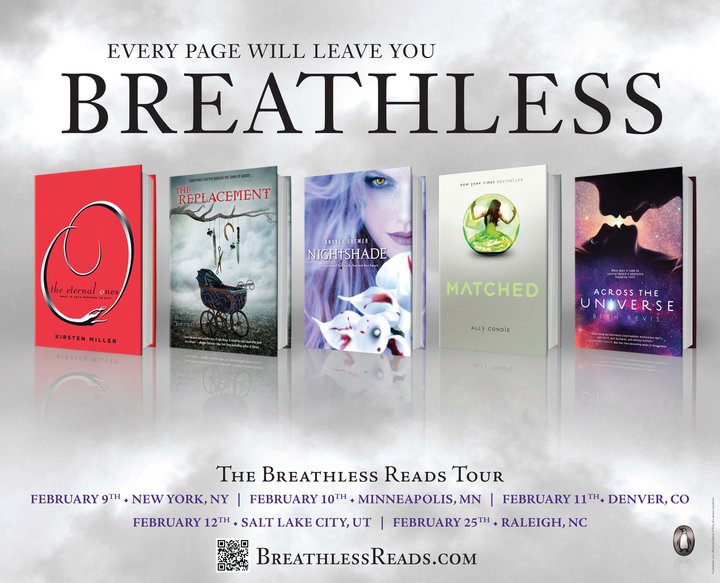 We've completed two stops on the tour and it has been such an amazing time. There is a fantastic recap of the New York event on Midnyte Reader's blog with lots of great photos.

If you were at one of the stops and want to share a blog post or pics just let me know (by email or in the comments), I'd be happy to post links!

Being on the road with other authors (especially authors as fabulous as Kirsten, Ally, Brenna and Beth!) is delightful. It's so much fun getting to know each person's quirks, hobbies, joys and struggles. It reminds me that one of the great joys of writing is how unique an art it is. Each writer must find her/his own process, tell her/his story in a way only that person can.

I can't thank all the amazing bloggers and readers who've come out to say hello. It is so fantastic meeting you and learning about your love of reading and writing!

Beginning Wednesday I'm off on the official Breathless Reads tour! (I'm also fighting a super yucky bug, so send health vibes so that I don't spread this plague around)

The authors of Matched, The Eternal Ones, Across the Universe, The Replacement, and Nightshade - that's Ally Condie, Kirsten Miller, Beth Revis, Brenna Yovanoff, and myself will be descending en masse for an event in each of our home cities. I cannot wait - it's sure to be a blast!

Our first stop is tomorrow night:

And here's the rest of the schedule:

I already held a contest to spread the word, but I'm doing it again - this time I have ten, yes 10!!, posters to give away. I don't have an image of the poster yet, but I'll put it up as soon as I have it. Each poster will be signed by all five authors. Just leave your name and a way to contact you in the comments below and you'll be entered (for those who entered the first time, you're already entered in this contest too)! Hope to see you soon!
Posted by Andrea Cremer at 2:45 PM 93 comments:

My Real Name is Amanda...

Once upon at time I had zero followers - it's amazing how life can change in ways you never imagined. Since I'm in the whirlwind of drafting and about to head out on the Breathless Tour I thought that I'd revisit some blog posts of the past. Thanks to those of you who've been here from the beginning and to those who've just joined us - I'm so grateful that you're all here!

A recurring quirk in my life revolves around my name. For some reason people (even people who know me well) often call me "Amanda."

This renaming of my person has occurred for as long as I remember, and is an act I've always corrected with a polite, if bewildered, smile. And I have always wondered why it happens. It happened yet again today and I decided to give this name-change phenomenon some deliberate thought.

Do I look like an Amanda? Is Amanda that much more common of a name than Andrea?

I've long been obsessed with origin and meaning of names. I have a tattered baby name book that I've read (yes read) since I was a child not because I think about names for my own children - but because I love the places, histories, and emotions that the meaning behind a name evoke.

In my novels the characters' names (first and last) reveal as much about them as do their actions and dialogue. I spend a lot of time in research before giving a character a name.

Since I seem to be a secret Amanda, I investigated the origin of the name. It was invented in the 17th century (oddly enough this era is my period of specialization in history) by a playwright and is Latin for "lovable, worthy of love."

I had a pleasant heart flutter when I read that origin story. From now I'll take being called Amanda not as a failure to remember my name, but as a compliment.
Posted by Andrea Cremer at 12:45 PM 9 comments:

Thanks so much for spreading the word about the Breathless Reads Tour, which kicks off next week!

The winner of all five books is:

Congrats, Kaylie!! Please email your address to me at andreacremerwrites (at) gmail (dot) com and I'll have the books shipped to you.

Hope to see many of you when we head out on the road. Fingers cross for zero blizzards!!
Posted by Andrea Cremer at 3:00 PM 6 comments: