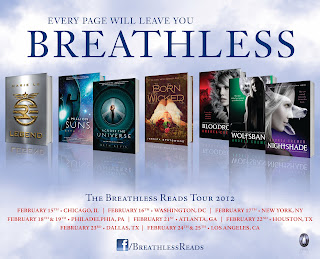 It's almost here! Visit the Facebook page for the latest news, updates, and tour info.
Posted by Andrea Cremer at 7:00 AM 9 comments:

On the Road Now, and Again

Hello, from beautiful Long Beach, California! As a northern girl who has scoffed at television images of Californians donning sweaters when it got 'cold,' I must concede my error. It has been cool this weekend, and while it's not frigid like Minnesota I have indeed wanted a coat most days that I'm here. Even though it's not sunbathing temps, I've still taken great joy in walking on the beach at sunset.

It's the middle of my BLOODROSE tour and I want to send a huge thank you to everyone I've seen on the trip!

I have two stops left: Tuesday in St. Louis and Friday in New Orleans. I'd love to see you!

If you weren't able to come out for this tour, I'm delighted to announce the upcoming Breathless Reads tour. I'll be on the road with Marie Lu, Beth Revis, and Jessica Spotswood. Follow the latest Breathless Reads news on Facebook! Here is the preliminary schedule - keep an eye out for more details to come:

February 24, Los Angeles
Once Upon A Time

Before I sign off I want to send a huge thank you to all of you for supporting BLOODROSE - I'm thrilled to share that you have put the Nightshade series on the NYT series list...at #5!!!! That means I'm raising my donation to Defenders of Wildlife to $5 per picture of BLOODROSE that I've received. And you've sent me loads of pictures so that means lots of money to protect wolves! You rock!! Thank you!!!
Posted by Andrea Cremer at 3:43 PM 11 comments:

Want to keep the holiday spirit going and avoid the winter blahs? Come run with the wolves and celebrate BLOODROSE with me!

Check out the tour stops - I hope you can make it!!!

It's after midnight, which means we're in the last day before BLOODROSE hits stores. I'll admit that I have very mixed feelings about BLOODROSE going into the wild. On the one hand I'm thrilled that the final book of the Nightshade series will be in readers' hands. I can't wait until you see what happens and I hope you revel in the adventure as much as I did.

On the other hand I cried a lot (seriously, a lot) while writing this book. It's a journey coming to a close. And while there will be more stories set in the world of Nightshade, this particular story does have its ending. That's a bittersweet reality that I'm still coming to grips with.

In the last hours before BLOODROSE arrives, there are a couple of things I want to mention.

1) My post about endings. It's the best answer I can offer about everything that happens.

2) My donation to Defense of Wildlife. Your support is invaluable: Here are the details for what' I'm doing: Because I'm committed to advocating for wolves, I've decided to tie in BLOODROSE to this action: for every picture of a reader and her/his new copy of BLOODROSE that is sent to me via email, Facebook, or Twitter I will make a $2 donation to Defenders of Wildlife.

And to up the stakes: If in its first days of release BLOODROSE climbs into the top 10 of the Barnes and Noble (and remember that B&N has an exclusive edition with additional content!) and/or Amazon rankings I'll up that donation to $3 per picture.

And finally: Because BLOODROSE is book 3, Nightshade moves from the New York Times Chapter Book list to the notoriously-difficult-to break-into Series list. If BLOODROSE hits in the top 5 of the NYT series list I'll increase my donation to $5 per picture.

I encourage you to support wolves and spread the word about the risks of taking gray wolves off of the endangered species list. I hope you're as excited as I am for next Tuesday. Thank you so much for sharing Calla and the packs' journeys with me!
Posted by Andrea Cremer at 12:05 AM 10 comments:

Sunday, October 14
Hall 1B
12:00 PM – 1:00 PM– GEEK GEEK REVOLUTION: THE SEQUEL
Location: Hall 1B
Because one fight to the death wasn't enough, GGR: The Sequel brings you a whole new set of authors fighting for the right to be TOP GEEK in this no-holds-bared geek culture game show. In addition the audience members will be asked to 'write-in' questions in hopes of stumping the authors and winning a prize pack of books. Featuring: Anton Strout, Andrea Cremer, Beth Revis, and Myke Cole. Led by Queen Geek Colleen Lindsay