When Nightshade hits the stores this October, I hope it finds it way into that lovely land called "Crossover," meaning it will appeal to young adults and adult adults. Crossover lit has been hitting the big time of late. I was shopping at the Red Balloon Bookshop yesterday and found several of my favorite "adult" books, The Mists of Avalon for one, now shelved in YA. So the currents of crossover are flowing both ways, YA into Adult and Adult into YA. I say hurrah to this trend!

I've recently happened upon another serendipitous crossover: history and my fiction writing. I've always been interested in the ways pop culture depicts and recreates history. When I lectured on the influence of Freud on historical analysis I used The Wolfman as an illustration. I use Buffy Season 4 "Pangs" to talk about the problems of Thanksgiving and historical misinformation and Firefly's "Jaynestown" to discuss public history, memory, and commemoration. Pop culture is fertile ground for historical excavation.

So I was thrilled to write a chapter in the upcoming anthology: Twilight and History. 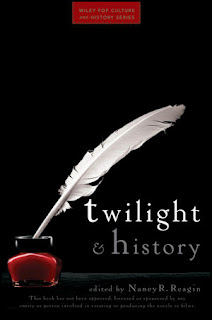 (Isn't the cover cool?!)
My essay uses Jasper's character to examine ideologies of violence, American masculinity and the Civil War. Having the chance to wear my history and YA hats at the same time was so much fun!
Crossover is good thing - for history and pop culture; for adult and young adult literature. In this case crossing the streams is not very bad

Let's hope lots more happens in the future!
Posted by Andrea Cremer at 10:56 AM