So Nightshade has been in stores for about a week and for five days of that week I was at home with the flu. I'm finally making my way back into the world and getting to see and hear fun book buzz. 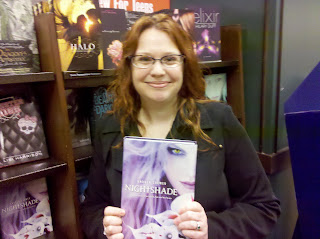 I had my first television appearance on KARE 11's Showcase Minnesota. And the St. Paul Pioneer Press featured Nightshade in their Sunday Life section.

I've been getting wonderful emails from readers - thank you so much for sending them. And I just learned that a Nightshade fan site is being created!!!

I've also had the chance to do some stock signings so if you're around Minneapolis you can find signed copies of Nightshade at Bookcase of Wayzata, the Borders at Rosedale, and Barnes and Noble at the Mall of America. I'll be signing stock at Borders Woodbury tomorrow.

Remember you have two days left to send me photos of Nightshade in the wild to be entered in the Mister Wolf prize pack contest.

And this Friday is the big day - Nightshade's official launch party at the Red Balloon Bookshop in St. Paul at 7:00 p.m. featuring a costume contest with special guest Shay Doran! I got my costume today and I am super excited about it - I think it may be one of my best ever!!! (Won't reveal what it is 'til after I have pics from the party.)
Posted by Andrea Cremer at 6:39 PM