I've ended up with an extra day in Austin due to an electrical failure on the plane I was supposed to take home. With this additional time on my hands I thought I'd take a moment to reflect on the fabulous that is the Texas Book Festival.

It's my first time in Austin and I must say: cool town. Lots of interesting people, amazing art, and great places to go. There's obviously tons going on all the time.

Including Santas on Segways (there was a huge line of them, and they had elves!) 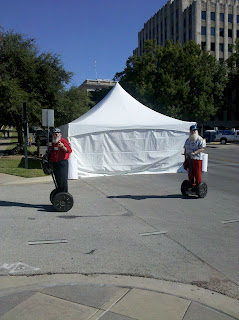 The Texas Book Festival has been great. It's wonderful seeing the downtown full of literary-minded folks. I was lucky to hang out with Heather Brewer and Kirsten Miller. Our panel was standing room only! And the signing afterward was a blast.

Then we had the Zombies vs. Unicorns panel. Usually I consider myself Team Unicorn, but we were assigned our teams upon arrival and last night I made an appearance on behalf of Team Zombie. And we rocked. Though Team Unicorn "won" I think it was just 'cause of Meg Cabot's sparkly cardigan - it was a bewitching cardigan.

I was very proud of Team Zombie. We made beautiful art together. Thanks to Heather Brewer's uber-minions for taking a photo! I composed and performed a haiku for my part:

Since I didn't know which team I was going to be on I also had a Team Unicorn haiku ready to go, to which you guys get exclusive access

Steed, ever untamed
Crowned with a weapon, deadly spire
To pierce hearts or win them

Clearly I will take any opportunity to write paranormal haiku.

It's been a wonderful trip, despite airplane failure, and it was amazing to talk with so many readers. Thank you to everyone who came out and to the wonderful volunteers who made the festival run smoothly.