On a good day I like to think of myself as feisty and iron-willed, on the bad days: obstinate. But if I'm tired, lacking coffee, or heaven forbid, hungry you'd all best duck and cover.

Stubbornness cuts both ways. On the one hand I have a feverish focus when I'm working toward something I believe in. On the other, if I think you're wrong it's hard to change my mind.

And I have an irrational tendency to reject suggestions out of hand, simply because I am such a mule. Most of the time, this knee-jerk 'no' doesn't hurt me. Others it costs me until I finally come around. 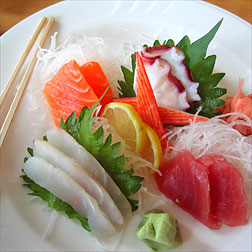 I'm not a big fan of fish. I don't care for the flavor of salmon (the fish that everyone else fawns over) and most of the rest of the ocean's bounty leaves me cold.

So for a long time I rejected sashimi out of hand - certain that if I didn't like cooked fish, I mostly certainly wouldn't like it raw. How wrong I was. Now I love sashimi (thanks to my husband for making me try new things) - except for salmon, of course.

Missing out on certain foods doesn't leave me with a strong sense of regret. Missing out on things that improve my writing, however, makes me kick myself. Where is this rant coming from? Well...*cringes*....I watched my first episode of Veronica Mars this week. 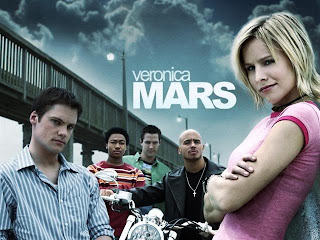 What????? You say. How could you not have watched Veronica Mars while it was on?

I know, I know - yet it was this very sentiment that made me dig in my mule hooves and refused to get on board. Actually it was more than that, it was everyone saying "if you liked Buffy, you'll love Veronica." I'm a rabid BVS defender and so any comparisons raise my hackles, and thus stubborn me avoided the show, ignored the rave reviews, and let it slip away unwatched.

What's even worse? Duncan (Teddy Dunn) was a good friend of my brother's in college.

I haven't ever met him, but I knew he was in the show and my brother vouched for the fact that he is a cool guy. Did I realize he was a romantic lead? Uh, no - I was too busy laying my ears back and kicking at anyone who tried to tell me I was missing out. *Ducks as objects are thrown*

Yes, I know. I am terrible. Did I mention that my stubbornness is a double-edged sword?

But yesterday a writer I admire, Becca Fitzpatrick, used Veronica Mars to demonstrate snappy dialogue; something I've only seen work with Joss Whedon's shows. And it was awesome. Her interview lifted the veil of smug "I know what's best for me and don't you try to tell me otherwise," and I realized that my stubborn streak had really cost me this time around.

Thank goodness for DVDs; and yes, I'm buying all the seasons now. And one of my New Year's resolutions for 2010 will be to accept more suggestions from others and really rein in the mule that can be me.

Just don't try to get me to eat salmon; honestly, I don't like it.
Posted by Andrea Cremer at 12:39 PM