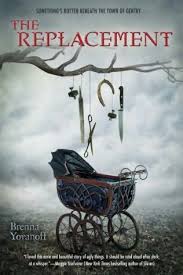 I’m delighted to be sharing my thoughts on Brenna Yovanoff’s The Replacement, the second release of Penguin’s 2010 Breathless Reads (in stores September 21!).

This book is extraordinary – a word I don’t use lightly. What’s fascinating about Yovanoff’s novel is its originality and compelling juxtaposition of chilling moments with incredibly poignant scenes. I don’t think I’ve ever encountered a horror novel with a sweet side, but The Replacement manages to be both frightening and moving.

Mackie Doyle is a unique and sympathetic protagonist – a changeling who is struggling to suppress his fey origins so that he can survive in the human world. Just like Mackie, the town of Gentry is hiding its own secrets. The setting is wonderfully mysterious and spine-shiveringly wrought. I was fascinated by Mackie’s dark hometown at the same time I was repelled by its horrors.

The Replacement’s gruesome creatures have their own stories and journeys, each of which adds more layers of complexity to the world Yovanoff has built. Within these pages you won’t find clear cut boundaries between good and evil, but instead a world shaded in greys – some silvery, others thick as fog – this ambiguity rings true, making the choices, struggles, and triumphs of the novel’s characters all the more real.

Should you pick up The Replacement, and I hope you will, you’ll be entranced by a strange, sublime world and a story that stays with you long after you turn the final page.