Thanks to everyone who sent pictures of Nightshade in paperback! Getting your comments, tweets, and Facebook posts made me so happy!

Email your address to andreacremerwrites@gmail.com to claim your prize :)

And because I just received a fabulous box of FINISHED Wolfsbane, instead of a pre-order you'll get a shiny, signed hardcover in the mail! Woo hoo! 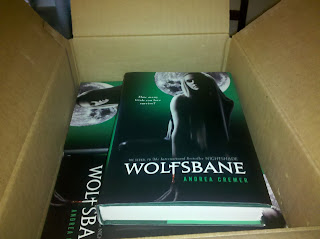 In fifteen days Wolfsbane hits stores. I can't wait!! I am dying for you to know what's happening to Calla and her pack. I'm also really excited for you to meet a new cast of characters who play pivotal roles in the series.

Leading up to Wolfsbane's release and continuing through its first week in stores I'm thrilled to announce that Mundie Moms is hosting the official Wolfsbane blog tour. From July 19 to August 9 you can find interviews with me and with characters from the book. At each stop you can enter for a chance to win Nightshade and Wolfsbane!

One more quick squee-filled announcement - the official 2011 San Diego Comic Con schedule has been released! I'm on two panels - one on Magic and Monsters at 3 - 4 p.m. on Thursday and the second is What's Hot in YA from 10 - 11 a.m. on Sunday. If you'll be at Comic Con I hope I'll see you at one or both panels.
Posted by Andrea Cremer at 9:21 PM