This weekend I took in a film: Battle: LA. I will pretty much see any spectacular disaster movie, whether good or bad. I'd put Battle: LA in the good camp - it was an enjoyable romp with explosions abounding.

My husband and I bond over a shared love of the imagined apocalypse. While its depictions range from eye-rollingly ridiculous to thought provoking, there's something fascinating about the end of the world as we know it. In Buffyverse, though not one of my favorite character's, Riley Finn delivered one of the best lines of the series: "I find myself needing to know the plural of apocalypse."

Pop culture has indeed dreamed up a plethora of means by which the world might end and I tend to enjoy society's demise in all its forms. The Ides of March seem an appropriate day to examine a foreboding subject. Let's have a look see:

Since I started out with Battle: LA I might as well continue in this vein. The alien apocalypse can be zany (Mars Attacks), insidious (Invasion of the Body Snatchers, X-Files), or bombastic (Independence Day, Battle: LA). It's interesting to see what our extraterrestrial neighbors look like, covet their superior technology, and wonder how humans will manage to prevail. 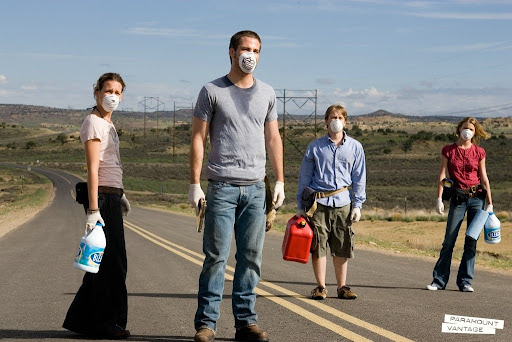 Maybe more frightening because of its plausibility, the supervirus apocalypse (The Stand, Survivors) gets popular play though not as often as other armageddons. Sometimes it wipes out the population, sometimes it makes people into vampires (Daybreakers).

And in case you were worried that all this world-ending mayhem was mutually exclusive, sometimes viruses even bring...

A perennial favorite, the zombie apocalypse comes in many forms. Whether wrought by the slow moving undead (George Romero's oeuvre) or the hyper-charged rage-diseased variety (28 Days Later), zombies spell bad news for society but give us lots of tips for survival. Double tap.

In fact, I'm not that frightened by the onset of zombie apocalypse because I think a good portion of the population is living in a zombie-apocalypse-ready state.

A relative newcomer to the end of the world scenarios, you'll find a few blockbusters (The Day After Tomorrow) but mostly made-for-tv fare (Category 7: The End of the World is pretty awesome). To get serious for a moment, the climate apocalypse scenario hits pretty close to home when horrible disasters (and yes, I know tectonics isn't climate, but still) are affecting sites around the globe. If you aren't already donating to the Red Cross, please consider doing so.

Like viral and climate apocalypses, nuclear apocalypse is plausible enough to be truly unsettling. But saw its popularity (Dr. Strangelove, The Day After, Reds, On the Beach) wane in the 21st century. I think "too close for comfort" is part of the we don't see more films of this variety. Also because the Cold War ended. Duh.

Classic. Who doesn't love a good angels vs. demons battle for the fate of the world? And the four horsemen: pretty hard to top. Whether the anti-Christ is being born (The Omen, Constantine) or Lucifer's running rampant (End of Days), this type of apocalypse is chock full of supernatural goodness.

Though I'd hope none of us are rooting for the end of the world, I'd still wager that we all favor a particular armageddon. My husband is a devoted nuclear apocalypse fan, I'm torn between zombie and biblical, which makes sense given that science fiction and fantasy are my favorite genres.

What's your apocalypse of choice?
Posted by Andrea Cremer at 12:00 AM