Wow! BEA is a whirlwind. I was so busy I haven't taken all the pictures I want, but promise more tomorrow. For now I'm happy to report that the Paranormal Panel was awesome. I met a bunch of book bloggers - yay!!! - thanks so much for coming to the panel guys :) I'm waiting for group photos to be emailed to me and then I'll post them.

I think I even managed some coherent thoughts beyond "OMG I can't believe I'm on stage with Richelle Mead and Holly Black!"

And the Penguin Booth has a giant Nightshade!!! So of course I had to get pics of that. 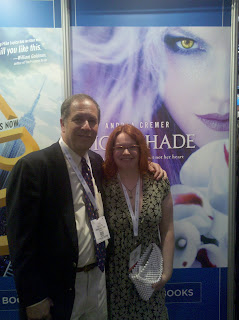 This is me and Don Weisberg - who I love - he's the President of Penguin Young Readers. 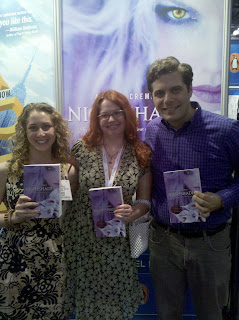 Agent Richard came to the panel too (thanks Richard!!!) but he'd ducked out before pics. Sneaky.

More to come - and remember, if you're around BEA on Thursday I'm signing ARCs in the Penguin Booth from 10 - 11 a.m.
Posted by Andrea Cremer at 3:09 PM