One of the incredible benefits of being a Penguin author is that I get to meet other Penguin authors. My first night at ALA I attended a dinner with wonderful librarians, great Penguin friends, and amazing writers like Laurie Halse Anderson, Ally Condie, and David Small.

Too much happened at ALA to squash it into a single post. So I decided to start with the pinnacle of my debut ALA:

They say you shouldn't meet your heroes.
"They" obviously picked the wrong heroes.

Hanging out with these guys exceeded all expectations. 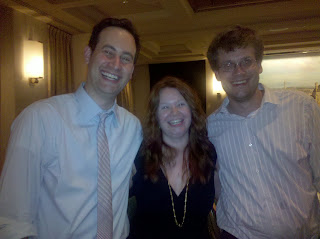 Through some amazing trick of fate, I got to spend pretty much the duration of ALA with David Levithan and John Green.

And I learned a few things.

One - that David Levithan is my writing soul mate. I don't think any other person could make it seem like a good idea - natural even - to sing "You've Lost that Lovin' Feelin'" into a mic in front of 100 teenagers. Yet somehow this happened. And it was awesome. Meeting David has given me two new goals in life: To at some point go on tour with David, so that singing about writing is always part of the deal. The second goal is to somehow convince David that he needs to collaborate on a YA novel that has a paranormal element and then to convince him that I should be the other half of that collaboration. I do not know how I'm going to make this happen - but I am working on it. 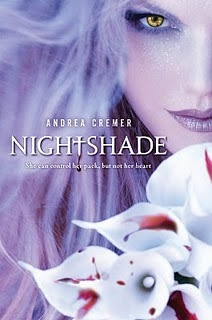 Two - John Green is not the zany character you think he is.

I think he is a spy - or possibly a super villain of the alluring variety. It's just something in his eyes. Sure, he's charming and witty. Sure, you love him the moment you meet him. But beneath that lively exterior lurks something else. Something complex and brooding. I'm now fleshing out a theory that Nerdfighters are actually a secret society working to overthrow the world (not that their rule would be a bad thing...). John Green would be just the guy to pull that revolution off. And nobody would see it coming.

If you haven't read John and David's books, you need to start right now. My favorite books are those that make me laugh out loud and sob. David and John both write with that type of insistent and authentic emotional quality. I reread John's Looking for Alaska on the plane right home, and had to constantly apologize to the person sitting next to me for my torrents of giggling and crying. I told him it was the book. I'm pretty sure he was convinced I was going through a break up that was somehow hilarious but tragic.

Spending time with these two authors made me feel better about the state of the world. Seriously.

Meet your heroes. Just be sure you pick good ones.
Posted by Andrea Cremer at 10:46 AM