Kirsten was kind enough to answer my questions about Eternal Ones and I also am thrilled to let you know that I have two ARCs of this fab book to give away!! Just leave a comment below and you'll be entered in the giveaway :)

Thanks so much for taking part in this Q&A, Kirsten! 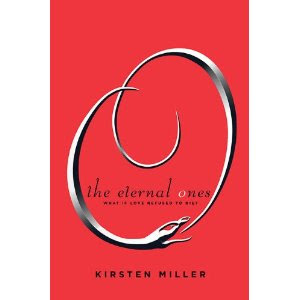 1. I'm going to start with the cover (I LOVE it!) because I've always been fascinated by the symbol of eternity vis a vis the snake eating its tail. What is your take on the cover image?

I love it, too! We must have gone through a million covers before we reached the final image. (OK, a bit of an exaggeration.) But the moment I saw the ouroboros, I knew we had the perfect cover. It’s so sleek and sexy and strange. I literally couldn’t be happier. (And anyone who writes knows how rare that is!)

In The Eternal Ones, a silver ouroboros (snake swallowing its own tail) is the symbol of the Ouroboros Society, a secret society that says it’s devoted to the scientific study of reincarnation. Of course, that’s just part of a much bigger (and darker) story . . .


2. I was enthralled by the places I traveled while reading this book - I loved the juxtaposition of Snope City and New York. Can you talk a little about the role that setting plays in your writing? And also, did you get to visit Rome for research?

Thanks! Well, I grew up in a small Southern town and moved to New York when I was seventeen, so I know both of those worlds quite well. But here’s a scoop (I haven’t told anyone else) . . . I went to Rome on my honeymoon, so it has a special significance for me. Also, the fact that it’s the “Eternal City” seemed to make it the perfect place for my two lead characters to get “reacquainted.”


3. The romance in Eternal Ones is wonderful. What do you think makes for good romantic tension between characters?

Thanks, again! Well, I falling in love is incredibly dangerous—whether your life is actually in jeopardy or not. I think romantic tension is a kind of fear. (Not the kind that makes you want to throw up, but the kind that makes you tingle all over.) It’s the fear of leaping into the unknown. The fear of putting your heart on the line. The fear that your love won’t be reciprocated.


4. I was equally captivated by the mystery in this book. When you came up with the story, did you think of it as a romance or a mystery or something else entirely?

Good question! When I was writing, I never really thought about labels. Now, I think the book should be what the reader wants it to be. If you’re the kind of person who likes a good romance, there’s certainly plenty of that. But if you’re the kind of person who prefers a thriller, I don’t think you’ll be disappointed at all. I’ve never thought of myself as a “romance” reader (though I certainly enjoy them), so I would probably pick up The Eternal Ones for the mystery and see the romance as a big bonus.


5. I love Haven's name - what inspired that choice?


6. What is your favorite part of writing?


When I’m writing a book, there’s always a point when I feel like I’ve finally crested the hill. It’s a struggle until I get there, and then the book almost feels like it writes itself. I love that moment.

I just finished the first draft of the sequel to The Eternal Ones, so there will certainly be more Haven! Now I must finish the third book in my Kiki Strike series. Once that is out the door, I have absolutely no idea what I’ll do next!

(Oh yeah, and if someone doesn’t send me the ARC for your sequel to Nightshade, I will not be held responsible for my actions! I’m dying!)

Thanks so much, Kirsten! I'm dying for An Eternal Ones sequel too!!
Posted by Andrea Cremer at 12:01 AM