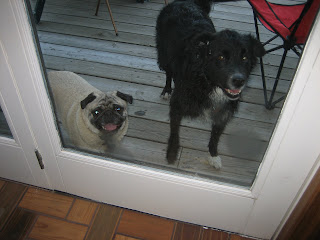 I run and practice yoga. The latter activity is meant to lengthen my muscles and spine (which it does, I was a half inch taller at my last physical, I kid you not), but also to quiet my oft-frenzied mind.

Usually this goal is attainable, but recently I've been having trouble achieving inner peace. Because of Rocco.

Rocco is a pug (pictured here with Gwyn, a border collie who tries to herd Rocco around the house). And he has decided that yoga is an activity he should be involved in.

Rocco is a beloved pet, but much like a stegosaurus I would surmise that his brain is walnut-sized. Pugs originated in China, and unlike most dog breeds they had no utilitarian purpose (rat catching, hunting, etc.). Pugs were bred only to sit on the laps of emperors. Hence, Rocco's only goal in life is to snuggle as often as possible. Rocco is an aggressive snuggler. He launches into laps from across the room and becomes deeply offended if you are trying to work on your computer and won't allow him to sit between you and your keyboard.

Lately his purposeful snuggling has invaded my yoga practice. Forward bends, twists, inversions, all have to be modified because as I strive for stillness Rocco inevitably sidles up to me and attempts to mold his body into a nap position that corresponds with whatever pose I'm in. He always snorts and give me an incredulous look when I shift poses and he is forced to begin the process over again.

Finally, during shavasana, which is supposed to be deep relaxation and meditation I end up with a pug paper weight in the middle of my chest. Some days I find this irritating, but most I resign myself to Rocco's determined cuddles and content myself in the belief that Nirvana without dogs wouldn't be worth much anyway.
Posted by Andrea Cremer at 4:06 PM