Gazing into my crystal ball, I can see the future. And in the not-too-distant future this book: 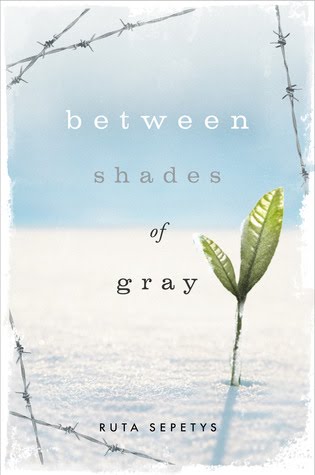 will be taught - and loved - in classrooms across the country (and hopefully the world!).

Between Shades of Gray is an exceptional novel, but you don't have to take my word for it. Check out this Booklist review:

*Starred Review* Sepetys' first novel offers a harrowing and horrifying account of the forcible relocation of countless Lithuanians in the wake of the Russian invasion of their country in 1939. In the case of 16-year-old Lina, her mother, and her younger brother, this means deportation to a forced-labor camp in Siberia, where conditions are all too painfully similar to those of Nazi concentration camps. Lina's great hope is that somehow her father, who has already been arrested by the Soviet secret police, might find and rescue them. A gifted artist, she begins secretly creating pictures that can--she hopes--be surreptitiously sent to him in his own prison camp. Whether or not this will be possible, it is her art that will be her salvation, helping her to retain her identity, her dignity, and her increasingly tenuous hold on hope for the future. Many others are not so fortunate. Sepetys, the daughter of a Lithuanian refugee, estimates that the Baltic States lost more than one-third of their populations during the Russian genocide. Though many continue to deny this happened, Sepetys' beautifully written and deeply felt novel proves the reality is otherwise. Hers is an important book that deserves the widest possible readership.

Ruta Sepetys has created a beautiful, heart-rending historical tale that will move and change readers. I highly recommend you get to a bookstore today and pick it up. Not only is the book incredible, but I was lucky enough to be at a conference with Ruta this past November and she is a fantastic human being. I am honored to share an imprint (Philomel/Penguin) with her!

Congrats on your debut, Ruta! And thank you for this extraordinary novel.
Posted by Andrea Cremer at 12:00 AM