No this isn't a repost of my UK book deal - though Atom Books has been posting some awesome tweets about Nightshade and Wolfsbane. UK publication doesn't happen until January 6, 2011 - but Nightshade is hopping across the pond next week for the London Book Fair.
I am pretending (while pining) that I also am going on this trip for four reasons:

2) I am convinced I would love book fairs and hope that with enough wishes to the Universe I'll eventually get to go to one.

3) I'm dying to meet my awesome UK editor Samantha, who is uber cool and so much fun

4) I love London (I know I already said that, but I really , really love it)I was already green with envy over Bologna, where there were awesome things like Kristin Cashore sword fighting.
and now Calla is going to London without me, but I'll think she'll do fine hunting down more foreign deals.

But I'd be fine spending my time swooning over these rows and rows of books. (Hey look, there's Penguin! Hi Penguin!!) 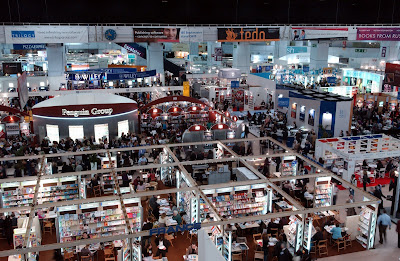 I mean it's at frickin' Earl's Court! Earl's Court is where they have Lady Gaga's concerts - it's that big.

Maybe Calla will bring me a souvenir.

No. Not that please. Ben Barnes AND Robert Pattinson? That's more like it! Good hunting, Calla!!
Posted by Andrea Cremer at 12:01 AM