Those of you connected to the book/writing world are probably, like me, all too aware that the BEA takes place this week.

Does my tone sound a little snarky? It is (sigh), only because I am totally, totally jealous of everyone who gets to be at BEA this week and especially of the shiny writing debutantes. I soooooo want to be one of those chosen authors who gets their two-hour signing slot at their publisher's booth.

BEA also offers a chance to snatch up ARCs. ARCs are Advanced Review Copies - books that won't be out until later this year, but if you pay $700.00 (yes, that is the correct figure I've just typed) to attend BEA you are able to purchase ARCs before they become available to the masses.

The ARCs I really want to get my hands on are Maggie Stiefvater's Shiver and Guillermo del Toro's The Strain.

Moreover BEA presents a fascinating glimpse of the book industry. Now I know any mention of the "industry" side of writing and publishing makes most writers curl up into a fetal position and I can hardly blame them, but I do harbor a (morbid?) fascination with the juggernaut of agents, editors, publishers, and distributors congregation in a single frenzied space of days to make the printing world go round.

I'd like to see it. I hope someday I will and as a participant, not just a spectator.

On another note, my neighborhood is currently subject to a strange natural phenomenon: a cotton explosion.

In front of our home grows a massive cottonwood tree and at the same time each year it sends millions of fluffy white spheres into the air. 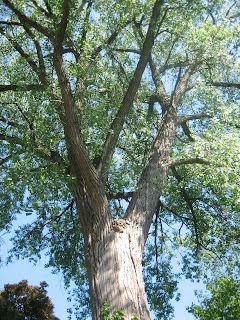 The atmosphere is so thick with parachuting seeds a glance out the window would make you think it's snowing in May (unfortunately in Minnesota that would not be a completely unheard of occurence, but thankfully in this case that isn't what's happening). 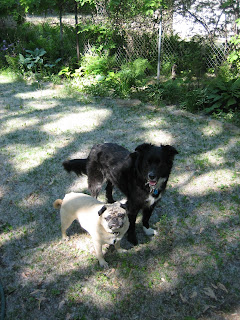 (Many thanks to Gwyn and Rocco for posing in this photo, under normal circumstances they'd be standing only on green grass rather than a layer of what looks like a cross between snow and dense cobwebs. Go spring!)
Posted by Andrea Cremer at 4:43 PM